Sunday School at Peace Lutheran Church begins at approximately 9:45 a.m. with a brief opening in the Fellowship Hall. Teachers and students then proceed to their classes at approximately 10:30 a.m. If you are a guest, please ask a Greeter, Elder, or Usher where the class for your child(ren) meets.  Other parents are also more than happy to help you.

Classes are available for children ages 4 through 18.  The children's classes follow a carefully crafted  "Enduring Faith" curriculum developed by Concordia Publishing House.  Regardless of the age of the child, the goal at Peace Lutheran is for children to leave their Sunday School classrooms with the ability to tell their parents about the lesson that was studied.

Adult Sunday School class is led by Pastor Garrett Smith. Pastor Smiths' class meets in the Fellowship Hall is a study of Genesis.

"An intelligent mind acquires knowledge, and the ear of the wise seeks knowledge."

How Did We Get That Song?

Have you ever wondered about the origin of some of the songs which we sing in our openings?  Who wrote them?  When did they write them?  Did they write other songs?  Now Pastor Albrect is working to answer those questions for you with a brief history of the opening song sung each Sunday.  Below you will find the most recent history.  Thumbnail images that link to previous histories can be found below.

Lazarus was the 9th of 21 children born to Georg and Agnes Spengler.

Georg was a clerk in the Imperial Court of Justice at Nuremberg.

Lazarus enrolled in the University of Leipzig in 1491.

When father died in 1496, Lazarus returned to Nuremberg and obtained a position in the office of the Nuremberg town clerk.

Lazarus met Martin Luther in 1518, when Luther passed through Nuremberg.

He became an ardent Lutheran, active in reforming the church in Nuremberg.

He was mentioned by name in Pope Leo X's bull Exsurge Domine, issued on June 15, 1520, threatening to excommunicate Luther and his followers.

Supported by the Nuremberg town council, Spengler refused to submit and was

excommunicated by the pope along with Luther on January 3, 1521. 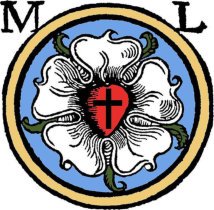 In April 1521, Nuremberg sent Spengler as a delegate to the Diet of Worms.

Spengler participated in the Diet of Augsburg in 1530.

He was largely responsible for the design of the Luther rose, adopted by Luther at the

time of the Diet of Augsburg.

He wrote several hymns, including “All Mankind Fell in Adam’s Fall” (LSB 562).

This hymn is quoted in The Formula of Concord.

Click a thumbnail below to view previously presented composers.